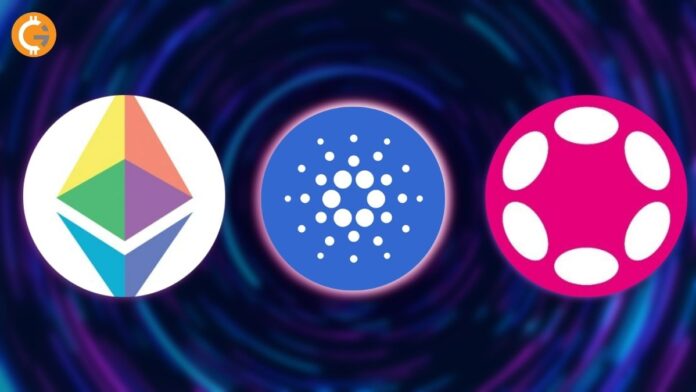 Whoever gets in earliest on the hottest project stands to be the biggest winner. This is really a universal truth in cryptocurrency but discovering those high quality projects to make either short, medium or maybe even long-term gains is challenging and very risky and that is why to make big long-term gains in the crypto space one must have a long-term strategy and outlook in place. Here are our top 4 Altcoins for long term crypto portfolios.

The main reason why more and more investors have confidence in Ether is that the technology behind this digital asset was really the one that enabled the creation of decentralized finance but also NFTs (Non-Fungible Tokens), DAO (Decentralized Autonomous Organizations) and of course the Metaverse. Just to have a better idea of how big Ethereum actually is keep in mind that it has more than $116B in TVL that’s Total Value Locked with 567 protocols in its ecosystem.

It was the first decentralized platform that gave the historic opportunity to people around the world to manage their assets without having a banking intermediary and they were able to manage those assets securely people can tokenize any physical asset that cannot be separated really from art to departments.

People can now prove 100% ownership of digital assets which can be used to get a collateralized loan. Ethereum developers can build open source software without learning a new coding language. According to the finder crypto adoption index, this was created by the way in December of 2021 so just a few months ago Ether is the second most popular coin where 31.7% of survey respondents in the US have added it to their portfolio.

Cardano was one of the blockchains that was born to solve the high transaction fees of Ethereum that whole problem while continuing to encourage innovation. It’s native token ADA has grown 2700% in the last two years based on its open source and inclusive technology that by the way supports environmentally sustainable projects.

And no doubt, we’ve seen a pretty sharp decline in price over these last few months but the all-time high did go $3.09 that occurred in September of 2021. Cardano has achieved really some of the very impressive milestones. It has done 32.9 million transactions, 3.12 million wallets creation and 68.7% of all ADA are currently being staked.

Cardano foundation is the organization behind ADA which has a main goal that is to drive the adoption of Cardano by building a legal framework and commercial standards. Also it brings technical resources to developers that are working fiercely to construct a global and robust community. Moreover sectors like education, retail, agriculture, government, finance and even healthcare are all beginning to use Cardano’s technology.

Right now according to coin market cap, there are 19 tokens in Cardano’s ecosystem. These collectively have 342 Dapps, developed indexes wallets, Defi, marketplaces, infrastructure, launchpad, metaverse, gaming, social and other sectors as well. In fact all kinds of different sectors as you can see here.

Polkadot is the easiest way to conceptualize a blockchain is as one platform established by decentralized nodes. It’s in the vast majority of cases with really only very few exceptions that it would be defined differently but polka dot happens to be one of those exceptions.

With Polkadot, you can create a blockchain also called a Parachain to launch your own decentralized project in an easy scalable and secure way. This network was created by one of the co-founders of Ethereum, Gavin wood in 2016.

However it wasn’t really until October of 2021 that the first Parachain saw daylight, Acala the Polkadot’s defi hub. And as a result of all this innovation at the time of writing this article the market cap of DOT, the native token of Polkadot sits in position number 11 among all cryptocurrencies with a market cap of 19.9 Billion and 24 hour trading volume of $465M. DOT right now sits at $18.27.

You may not have known that Polkadot was founded by the web 3 foundation. It’s one of the most important research organizations that constantly contribute to the development of decentralized protocols. In other words, without their input protocols such as proof of stake which is used by Ethereum, Polygon, Avalanche, Solana and others proof of coverage.

For example, Helium these would not have been developed to the level that they are today and also in any Parachain you can make very fast, cheap and secure transactions with other pair of chains. Another essential feature of Polkadot is that anyone can transfer any kind of token between parrot chains. Moreover here are some numbers that demonstrate just how effectively and how successfully this network is growing.

Moonriver the most active parachain of Kusama has achieved 10 million transactions, 70 integrations and over 355 000 wallets. And just a quick note Kusama is a blockchain that was launched by Polkadot before Polkadot’s auctions went live. The goal here was to focus all the experimentation and early stage projects on Kusama. while polka dot

This of course is a decentralized platform that develops NFTs and integrates them with the metaverse. It’s now live on Polkadot which represents a great and a very organic partnership that we have very high hopes for.

This is a network of interconnected block chains that is supported by IBC that’s inter blockchain communication protocol. And what makes cosmos unique is that projects are allowed to be unique blockchains that interact inside the cosmos ecosystem through atom, ATOM which is cosmos’s native token.

To give you a better idea of how big cosmos is through its consensus protocol it manages more than $141B in digital assets in blockchain like BNB, Terra Luna, Ethereum, Crypto.com, Thorchain and even Bitcoin. ATOM in the 20th position of all cryptocurrency projects with a market cap of $7.9B and 24-hour trading volume of over $452M.

The team behind cosmos is the interchain foundation a software development organization founded back in 2014 by Tendermint and currently 17 more members support cosmos. Moreover cosmos has developed it’s SDK. It’s software development kit framework supported by a proof-of-stake consensus with a 99% lower carbon footprint which lets developers build innovative applications.

In addition, cosmos lets communities organize allocate resources to its members by developing a governance mechanism and to close the circle users can also have full control over gaming cross-chain assets. Cosmos today can boast 150 validators also known as nodes, 40 interconnected blockchains and 63% of all atom tokens are staked, that is a great statistic.

As you all can see Ethereum, Cardano, Polkadot and Cosmos are projects that are backed by very innovative consensus mechanisms that try to make their users have the best experience possible when it comes to managing their own digital assets. That’s why these projects have very big potential to grow even further and even more consistently over time while they maintain and continuously push for improvement.