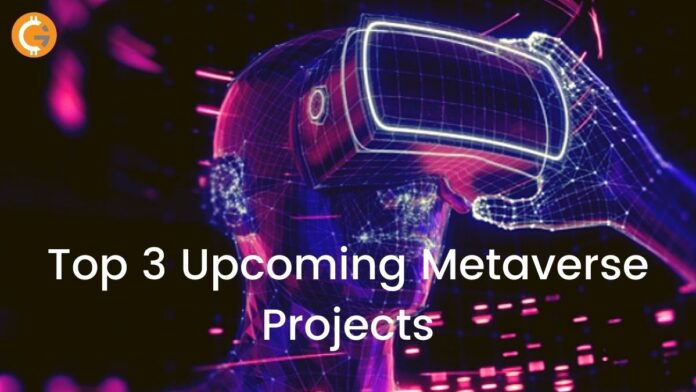 The metaverse, it really looks like it’s having it’s moment in the sun right now, kind of like NFTs did last year in 2021 and kind of like defi did during that great defi summer period of 2020. In this article, we are discussing top 3 upcoming metaverse projects that we have on our radar and that you should probably have on yours as well.

Alterverse is sky city at first glance looks like a space AG kind of version of Dubai but less fake looking. Alterverse uses unreal engine to build both a free to play and play to earn game, so you can buy land, you can mint sell and rent your own NFTs and fly around from place to place.

There are currently two additional games in the works an FPS that’s First Person Shooter game called outpost and a survival game called wrecked. 3,000 players have already registered for these games. Their partners is community Dao who’s buying some land and constructing a 20-story tower of penthouse apartments in Alterverse. We expect to see more partner deals like this and sky city is going to be the main hub of the Alterverse.

The in-game coin is $ACE and there’s even a mayor a city council and voting systems which when finalized are going to lead to a late 2022 or early 2023 election. We expect the ACE token to have a big impact on that. It’s expected to go live in quarter 2 of 2022. They also have their own NFT marketplace on engine. You need an engine wallet if you want to buy the skins for now but you don’t need engine to play the game itself.

The team is totally public and outward facing which is something that we always are on the lookout for. We like to see that and one last really cool feature that Alterverse offers is their meta servers. It’s kind of like bringing decentralized node operators into the metaverse. In fact we don’t think anyone else is doing this right now based on our research.

Here’s the idea anyone can run a meta server, you can create your own world or go to others, when that server connects to Alterverse master servers which are kind of like root systems for the internet. So this means that anyone anywhere can host a world or game. You can see many items within Alterverse will be available to buy and sell. There further plans include accepting BTC, ETH, Stable coins and even PayPal for NFT purchases.

They offer land sales as well as cross-chain interoperability and all on dots substrate. Their odyssey sale and TGE (token generation event) in late November and early December was a success. They sold out 80 million NUUM which represents 8% of the 1 billion total supply.

👉Sold $1M of land within 10 days to reputable communities – the good neighbors of your future metaverses.💕

A little more now on tokenomics of the 1 billion total supply of NUUM 50% will be available to the public. The lock-up investing schedules are listed in the white paper with most non-public tokens locked for a minimum of one year. There are two other tokens to be aware of BIT that’s the in-game token and NEER is the pioneer token.

BIT is mined and burned while NEER is the Kusama listed token specifically. There are also 100,000 parcels of land for sale here and it looks like there will be staking options for all three tokens which will soon be available as well.

The third project that we’re looking at today is Pax World which has a different focus. These guys are totally focusing on communication in the metaverse. Everything in this world is about interacting with others whether it’s for social, educational, commercial, romantic purposes whatever but everything kind of boils down to communication.

To their credit they make it easy by supporting many different devices and having low hardware requirements to get into their world. Pax world has a couple of other cool things going forward as well they already have a working product for example that includes video, audio 3d and face scanning support.

They had a huge demo day that happened in January of this year so a few months ago in Switzerland with more than 10,000 attendees between in-person and online attendees. They also just won a big award at AIBC Asia for the quality of their metaverse. They’ve also raised five million dollars in seed money so they’re well funded, their DAO is in the works.

Starting the week with such great news😎

They’re gonna have a marketplace that incorporates NFT for land sales, tickets to events and 3d NFTs that you can use to pay for social or educational events. Their white list for land sales is going on right now. You can get an early parcel if you sign up but it doesn’t look like they’re going to be available for too much longer.

Let’s talk tokenomics now, there are going to be 1 billion PAXW tokens issued and between partners and the ecosystem and the community about 40% of the tokens will be available to the public. All groups aside from the community and the funds from the IDO have lock-ups and vesting periods. The Pax world IDO for their BEP20 token will take place on Meta VPAD and GameZone but no date has been set at the time of this writing. It was supposed to take place in early march but it was postponed.

So there you have it guys three great options for getting into some potentially very profitable metaverses at a relatively early stage. Whether it’s the great graphics asset options or two game options from unreal engine led Alterverse or your option to build your own at BitCountry or your interest in communicating with or educating others at Pax World. you have different options here.

If you like learning about projects like these whether it’s metaverse or other sectors in cryptocurrency then you may find you’re going to benefit even more from all the up-to-date research that we produce via Coin Gyaan telegram channel then feel free to join us.