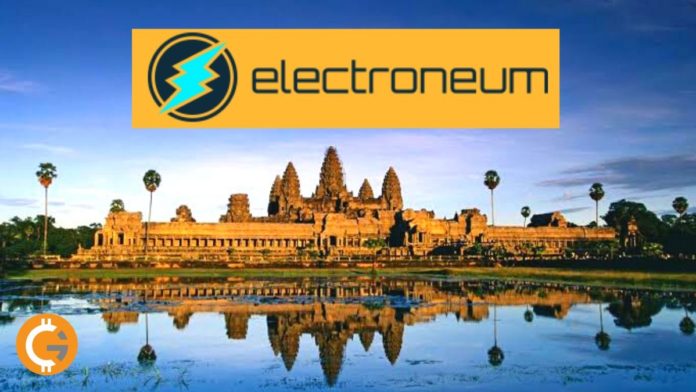 Electroneum, the bridge builder of blockchain startup recently dropped the news of the latest upgrade in the blockchain technology which cheered up many users. Now, the company has put two more cards on the table to nurture more inspiration in the digital age of cryptocurrency. Electroneum has landed a deal with Cambodian communications giant and “Best Telecommunications Company Cambodia” awarded Cellcard allowing users to spend ETN token to recharge credit and airtime on their phones.

On the other hand, Electroneum has also unveiled a platform for freelancers naming it AnyTask. AnyTask aims to encourage freelancers around the world to outshine in the variety of tasks and at the same time rivaling well-acclaimed freelance marketplace like Freelancer, Fiverr etc. This endeavor will give rise to Cambodian’s miniature freelance market and help people get the preferred profession for themselves.

Electroneum’s partnership with Cambodian telecommunication was revealed on 1 January 2020. With this cooperation, Electroneum became the world’s first cryptocurrency to work with a mobile network operator. Furthermore, the collaboration of Electroneum and Cellcard will enable users to earn easy rewards on Eletroneum’s native token, ETN.

Electroneum specified that this is the first time they are joining hands with an MNO, and this partnership is crucial for them as it will help them to connect with more people. Since we know that Electroneum previously had dealt only with mobile virtual operator companies, this cooperation of their with Cellcard will allow 3 million users in Cambodia to use ETN app and ETN tokens.

Cellcard, on the other hand, is Cambodia’s biggest cellular company covering more than 80% of the territory with an extraordinary customer base. The mission of Cellcard is conformed with Electroneum, whose first concern is to root out financial repudiation and allow the masses to access the digital economy with ease.

Cellcard regarding this also posted a video explaining the significant steps to be taken by the user to start earning this benefit of the plan. The steps in the video involve Know Your Customer process, which is mandatory to avail the Cellcard services. The first time, users need to register with ETN App by filling out their details which are to activate the ETN wallet. After the completion of the last-mentioned steps, the user will be rewarded with 30 ETNs which will instantly be transferred to their wallet by ETN app. Now users can use this earned rewards to avail the services of Cellcard.

Electroneum introduced a beta version of AnyTask, a freelance platform.

Electroneum being the ruling king in the blockchain market has introduced a new idea of learning, sharing and monetising digital skills through AnyTask. This platform will allow more than 1.7 billion people to access online digital learning globally, who do not own any bank account. With the help of AnyTask, developed markets will be able to take up low-cost expedients of highly motivated skilled talent and help them to make money out of it. AnyTask is currently available in beta version and will soon be functioning as a fully decentralised platform.

The CEO of Electroneum, Richard Ellis, said that AnyTask would be an alternative for all freelancers who want to demonstrate their abilities to potential customers. While asking how will it work, he explained that the payment system of AnyTask would break the currencies to the ETN token, which will then be deposited in the user’s wallet.