The new year, and decade has finally come, and Bitcoin has been garnering a lot of eyeballs recently, due to its momentous third halving, coming up this May. Just like the previous halvings, this time too, Bitcoin has already started behaving more erratically as the halving date draws closer. Its price will keep skyrocketing until the actual event, and for more than a year after that, before it finally settles down again. It must be admitted, that for a while, Bitcoin had lost people’s interest, because of newer, more promising cryptocurrencies like Ethereum and Electroneum emerging. Now, finally it’s the center of attention again. Therefore, right now, every bit of news about Bitcoin is crucial in deciding its future price.

Today we’re looking at some of the recent events that took place in the world of Bitcoin, which could soon have far-reaching consequences.

Bitcoin soars to all time high of $8300, will a crash follow?

With the halving just around the corner, Bitcoin miners have significantly increased their mining activities, in order to release as many coins as possible from new blocks, as possible, before the halving slashes block rewards. Thus, as more newly mined blocks get added to Bitcoin’s network, the capacity of the network increases. This capacity is known as the hash rate, the rate at which a computer network can take any set of data and turn into a set of letters and numbers of a certain length, in other words, a hash. The hash rate increases with the number of blocks added to the network, to share the load, and this in turn, drives up the price of Bitcoin.

John McAfee: “Bitcoin is not relevant to cryptocurrency

John McAfee, is one of the biggest early adopters and influencers in the cryptocurrency universe, or the Cryptoverse as it is better known. He was the one who predicted that Bitcoin would be worth $500,000 dollars by the end of 2020. Even when that seemed unlikely, he reinforced this speculation, even raising the value to $1 million dollars, by the end of this year. 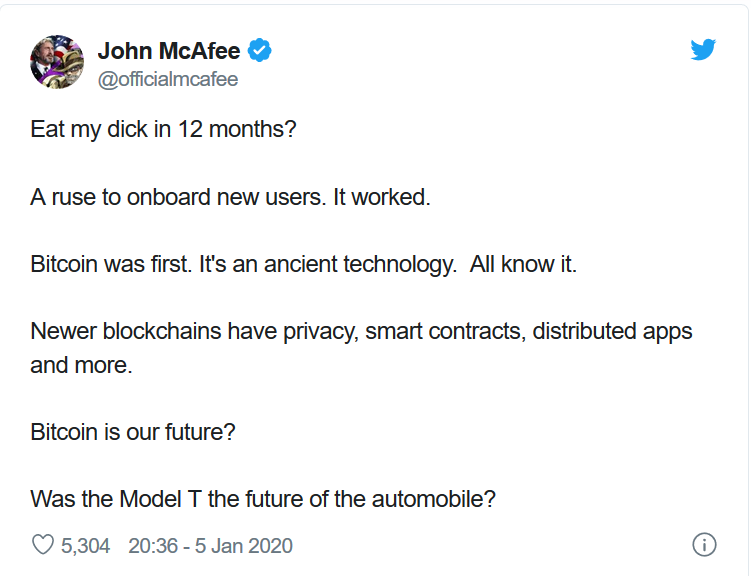 Must Read: Watch out Bitcoin: 5 altcoins which top Bitcoin in 2020

However, now, when this is clearly not going to happen, amidst outraged followers, he has publicly withdrawn his support of Bitcoin and channeled it towards Monero instead. According to him, Bitcoin is now history and now irrelevant to cryptocurrency. It was the first, but not the best. He also claims that he used the prediction only to attract new cryptocurrency users.

Bitcoin Price Rockets After Iran Attacks US Base In Iraq

On the geopolitical front, the US had recently been responsible for the killing of an Iranian general, Qassem Soleimani. Iran has now taken revenge, and attacked two US military bases in Iraq, with missiles. Although there are no physical casualties yet, this has driven the price of commodities like gold and crude oil, through the roof. Bitcoin soon followed the same trend. The universal question now is whether Bitcoin, with its status as a “safe-haven asset” will continue to mimic the trends of traditional commodities, in times of international tension. This is indeed a pressing question. Once Bitcoin starts imitating traditional commodities, it will lose the unique attributes that make it so valuable right now, such as being a decentralized, peer-to-peer payment network, and may merge into the traditional financial system. This could eventually lead to it being controlled by central banks as well.

Last week saw Bitcoin open at a price of $7242, and close at a staggering price of $8259, just a little less than the all-time high of $8354 on 8th January. This week saw an absolutely unprecedented bullish trend in Bitcoin, which has never before touched or crossed the $8000 mark. The market cap has also increased over this one week, to more than $148 billion, due to the number of new coins being rapidly mined. This is a sign that the tumultuousness of the Bitcoin halving has already started, with every little price change eventually adding up towards the final price, on the day of the halving.