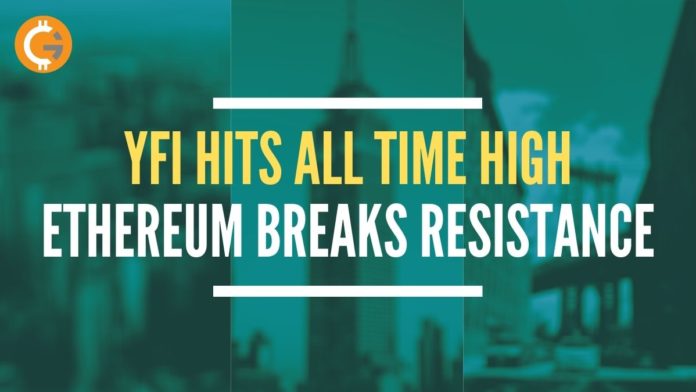 Why yearn finance is undoubtedly all the rage in the cryptocurrency field right now ? YFI has posted an all-time high value of $39,000 at Poloniex and Binance on august 30th after it was posted two previous peak values of $27,000 and $32,000 within the same 24 hour period.

The impressive momentum of yearn finance has resulted in the CEO of Bitmex, Arthur Hayes predicting that YFI can go as high as $100,000.

YFI’s value currently stands at $30,000, signifying an astonishing 3,500% instrument in value in roughly one month.

Since the beginning of the month Ethereum has been consolidating within a narrow range. A spike in the buying pressure behind ether that began to build up around the support seems to have confirmed the bullish formation.

As a result it led to a 25% bull rally over the past week that has seen Ether break above the resistance and make a new yearly high the surge started on august the 31st. the coin went up sharply reaching a resistance at $435 in only a few hours.

It is worth nothing that following the recent bullish impulse the ethereum network also began to expand the recent spike in ether’s network growth can be considered a positive signal that supports the overall uptrend.

The Flare Network Gets a Response From The Ripple Community.

As it is regarded as one of the leading on-chain price indicators. The flare network has gotten a remarkable response from the ripple community. As holders of XRP rushed in multitude to claim their spark reward on the ripple back blockchain platform. Following the launch of flare XRP holders who joined the platform were promised spark tokens airdrop on the date yet to be announced.

However spark has said it was surprised by the amazing interest in its project over the past few days as over 295 million xrp and 5,400 plus accounts have been set up to claim the spark tokens as of august 28th. Flare Network said, there are total of 45 billion spark tokens to be claimed.

Acala, a DOA on Polkadot Network, has Announced a Series A funding.

Acala, a DOA established on the newly launched polkadot network has announced a successful series A funding from 15 high-profile investors. The investment is a simple agreement for future tokens deal and was led by pantora capital. The total amount raised is around $7M. Acala is a financial primitive platform that will provide an alternative infrastructure for DeFi on polka pokedot’s multi-chain ecosystem.

The acala platform will feature a marker DOA like governance structure with split governance and stable coin tokens on the polkadot network. It also plans to go beyond market doa’s current capabilities with a decentralized exchange on top.