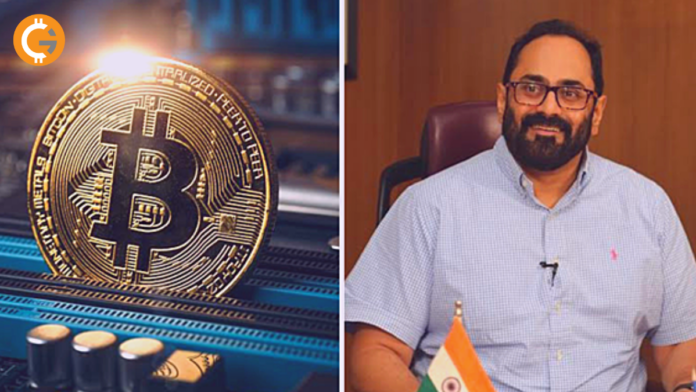 Cryptocurreny is not just virtual money, it is a global phenomenon that took over the world by storm. However, India has, so far, remained indifferent to their advent and has never recognized it as a legal tender.

Although there is no law that bans Cryptocurreny in India, there are no regulations that can protect the Indian citizens against it.

However, the recent trends in the trade of cryptocurrencies have drawn the interest of Indian political leaders who are willing to look into the prospects they have in store. And, what can be seen as a major leap for those interested in Cryptocurreny is the response of Bengaluru MP Rajeev Chandrashekhar to a tweet that demonstrated the power of cryptocurrency.

They say that the country which is willing to ban Cryptocurreny out is, in fact, restricting the rights of its citizens to earn more. Well, with the progress that the introduction of Cryptocurrency and Blockchain regulation laws promise in terms of employment creation, cyber security, and GDP offers, they must be speaking out of experience.

It was a tweet by the Bitcoin pioneer himself, Charlie Shrem, that incited the interest of one of the most respected MPs in the country- Rajeev Chandrashekhar. After having read into the astonishing benefits of engaging in cryptocurrency trade, Chandrashekhar requested Nischal to reach out to him on DM. And, if we go by twitter’s standards, DMs lead to great things at times!

The reply was welcomed by Shrem as he showed interest in flying down to India in case anything appears to be working out. Not just Shrem, several followers and admirers of Chandrashekhar respected the move and thanked him for showing interest in something that could mean an all new sector for finding jobs in the country.

There is doubt about the fact that there are thousands of hackers and coders in the country who, due to the lack of jobs, are involved into malicious activities. These range from eavesdropping into someone’s private lives to ripping people off their hard-earned money by accessing their confidential account details.

However, if this section of educated but unemployed youth finds jobs in virtual currency regulation, the issue of cyber theft can be tackled to an extent.

Moreover, it is not only Chandrashekhar who is looking into India’s prospects with the introduction of regulations governing the exchange of Bitcoins, several state governments have also deployed forces for the same.

It is the representatives from Ministry of Electronics and Information Technology, Reserve Bank of India, Securities and Exchange Board of India and Central Board of Direct Taxes, who have been given the responsibility to submit the reports highlighting the benefits of cryptocurrency in the fintech.

Recently, they have suggested that the introduction of cryptocurrency in India will lead to higher liquidity of the country, freedom from the hassle of dealing with various currencies, improvement in capital compliance costs, and more! Even though the regulation might begin with the Initial Coin Offerings, with the politicians’ looking into the matters, India’s Fintech Landscape might soon flourish with the exchange of cryptocurrencies.