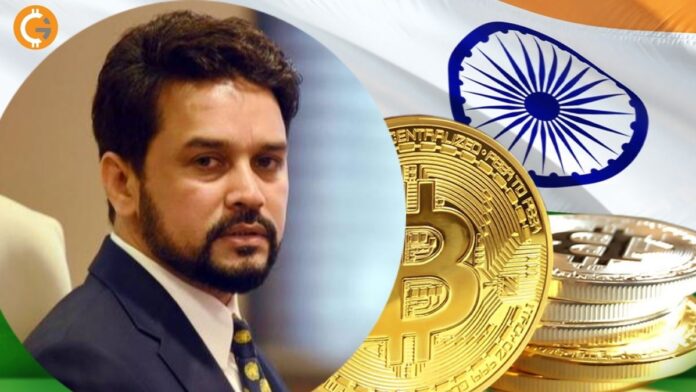 Recently, Indian government listed a crypto bill to introduce in the lower house of the parliament Lok Sabha. The bill delves to ban cryptocurrency in India. It also included additional Regulatory frameworks that will be created by the government. Moreover it had also plans to introduce a new digital currency issued by Reserve Bank of India.

On Tuesday, Minister of State For Finance Anurag Thakur told Rajya Sabha, The government will soon roll out a bill on cryptocurrencies which is being finalised. He also claimed that regulatory bodies like SEBI and RBI do not have a legal framework to regulate cryptocurrencies directly. They are not the currencies, securities or assets issued by the identifiable users.

He further said, the existing laws are inadequate to deal with the subject.

Further to report issues related to the digital currencies, the  government formed a committee called Inter – Ministerial Committee. The Central Bank of India had already banned the processing of cryptocurrencies transactions in 2018. Unfortunately, the Supreme Court overturned the ban.

“The bill is being finalized and would be sent to the cabinet soon, so we’ll be bringing the bill soon,” Thakur said on Tuesday while replying to a question in the Rajya Sabha, the upper house of the Indian Parliament.

Thakur said existing laws in India are “inadequate” to regulate cryptocurrencies. Thus, an inter-ministerial committee (IMC) was formed on the subject, and that committee submitted its report, said Thakur.

India’s finance minister Nirmala Sitharaman said Tuesday in her written response that the “Government would take a decision on the recommendations of the IMC and the legislative proposal, if any, would be introduced in the Parliament following the due process.”

This video helps understand more on the status of the bill.

It’s still early days. There will be discussions and deliberations

I’m sure our Honourable PM @narendramodi is going to ensure India participates in Crypto #IndiaWantsCrypto pic.twitter.com/RgeAfmBbQZ

CEO of top Indian crypto exchange Wazirx, Nischal Shetty claimed that: “I think that’s a positive sign. There will also supposedly be discussions around the bill, so it’s not going to be implemented in a hurry. I think overall this is a very positive development that just happened.”

Overall, the government’s verdict to ban crypto in India comes a week after the RBI announced it had started to explore the probability of issuing and introducing a digital currency backed by Rupee. At present the government is looking forward to fast-track the disputed cryptocurrency bill based on an executive order called the ordinance process. If the bill is passed, this could raise the beginning of positive crypto regulations.