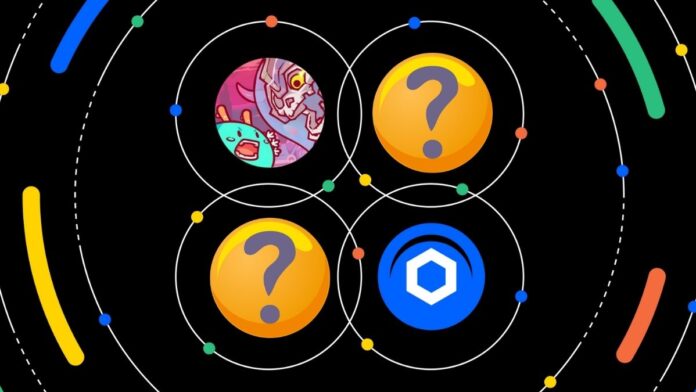 The crypto sentiment has changed pretty quickly. We’re seeing green candles all over the place and plenty of altcoins are pumping again, but not equally. There’s a disparity, some projects are really taken off while others are just kind of starting to regain their footing and that’s why we’ve dug up four exceptional altcoins winners among winners. some of which have actually great news coming up for their respective projects this week. so stick with us guys, in this article we’re counting down the top 4 altcoins for April 2022 in the crypto space that you should have your eyes on right now.

Chiliz (chz), is the rocket fuel on socios.com. this is the place where you can buy all your favorite fan tokens. Fan tokens, if you’re not familiar are like a type of cryptocurrency that allow holders to vote on mostly minor decisions related to their sports clubs.

If you’re noticing the pump today for CHZ, it’s because just hours ago literally the news came out that football legend Lionel Messi has signed an agreement worth more than $20M to promote digital fan token company socios.com.

Socios currently has a new web app in beta mode which has been released and what started out with the football fan tokens has now evolved into fan tokens, covering all kinds of areas in the sports and entertainment industries. We’re talking gaming, mixed martial arts, basketball, tennis, American football, ice hockey, motorsports all kinds of other categories as well.

The big news about Chiliz is that, they’re about to launch their 2.0 testnet or Chiliz chain 2.0. So come Thursday, the 31st of march which is two days away as of the time of this writing, it’s going to be announced in Istanbul, Turkey by Alexandre Dreyfus, he’s the CEO of Chiliz and Socios. He has stated that Chiliz is becoming a layer one protocol for the sports and entertainment industry. So this is going to be a pretty massive milestone for the project as a whole and they’re really showcasing the strength of that community.

As you can see at the time of this writing, it’s up over 8% on the day sitting at $0.29 and this is importantly above a crucial support zone of $0.21. It’s also above a $0.27 zone that used to be resistance but it seems that at least for now it’s been broken. If this positive bullish momentum continues we could see a move towards $0.31. $0.36 and $0.42 based on Fibonacci levels.

Here’s the bearish scenario, over the course of these last few weeks, yes admittedly CHZ has been in a downtrend channel. If you look at higher time frames like daily weekly and monthly candles. We’re not quite out of the bearish territory completely not just yet and so failure to hold on to. This $0.27 support zone that could bring us back down potentially to $0.21 and if we continue to dip than $0.15 and even $0.08 cents and potentially lower.

Axie infinity is the project of course which became one of the most popular play to earn games. It also became an alternative way of generating income for people all over the world. Especially of course people who lost their jobs unfortunately in countries with lower income opportunities. Specifically countries like the Philippines and Cuba where the popularity of this ecosystem really took off.

There’s still very much a strong following in the Philippines with spin-offs from Axie like various guilds. These provide onboarding assistance to players who can’t afford to join like yield guild games. Worldwide players got introduced to the concept of P2E and as a result many other games profited from that movement.

This week we have two pieces of pretty big news concerning Axie. The first one is that Axie has reduced the number of free transactions depending on how many Axie or land NFT players own that’s going to influence the amount of free transactions. As a result all Axie related dApps on the ronin chain saw an increase in traffic and this is likely because they want to take advantage of the free transactions.

The second big  news is the introduction of Axie infinity version 3. As of right now this should include a 3d environment, loads of new functionality, a redesign of the battle areas and you can start playing with a free team of three axes olek buba and puffy and especially that last feature should really open up Axie to an even bigger market and audience.

The price of AXS currently sits at just under $70. AXS may retrace back to support levels just below this of $57.30 but after those retracements if AXS manages to break above the resistance level which right now we’re close to it, sits at 71.50. Once it gets past that mark then we’re gonna be bullish breaking above $71.50 with significant buying volume is going to lead most likely to a move towards $89.60 and $111.45.

Here’s the bearish scenario, AXS has been in a downward trend really over these last few months so we don’t have a strong bullish bias at the moment for a long-term scenario but if the support level of $57.30 doesn’t hold then we could see a drop further to $44.10, $29.7 cents and possibly below.

Chainlink is the king of oracles. There’s no disputing that despite lots of new competition in the oracle space chain. Link has managed to keep its first mover advantage with their off-chain data and services. They supply on-chain smart contracts with information straight out of the real world and their ecosystem is just enormous.

They are without a doubt the number one oracle provider in the crypto and blockchain space. Since Chainlink launched back in June 2017, the team has been working on getting their word and their services out. This has resulted in a current ecosystem of 1,240 participants. Old mariners clearly remember when Chainlink added one new integration per week. However get this, just yesterday on march 28th Chainlink announced they added no fewer than 18 integrations in just one week. This included six services distributed across six different chains. These chains included Avalanche, BNB chain, Ethereum, Fantom, Polygon and Solana.

Here’s the bullish scenario right now. Link sits at over $17 which means it broke the bearish downtrend line on the lower time frames. We’re talking four hour time frames so it’s now trading above the support zone of $15.30. If it stays above this zone we could very well start seeing a move up above $17.40, $19.50 and $22.70 based on Fibonacci.

Here’s the bearish scenario. Link again has been in a downtrend channel and we’re not completely out of the woods just yet. When it comes to higher time frames, we’re talking daily weekly and monthly. Link is still in a downtrend so failure to hold that support of $15.30 could mean a dip to $14, $12.89, and even $8.96. Not a financial advice but those would be pretty good buying opportunities in our opinion.

This layer one chain is interoperable with Ethereum and the cosmos network. The network uses EVM and WASM smart contracts. This gives instant finality low transaction fees multi-chain architecture and web3 content delivery network. This may not be a project that many people know about but it’s still one to keep an eye out for.

By market cap, they’re listed as you can see at number 407 on Coin Gecko. Their network CDCN is a global web of nodes that connects and powers a new decentralized media company. As a result what they want to offer is optimal delivery speed, affordable costs, premium streaming quality and unlimited shared bandwidth.

As an ecosystem for the media universe, they lower the cost of establishing trust and distribute bandwidth resources efficiently across geographies and sectors. They offer web3 solutions for storage, file transfer, audio, metaverse video and live streaming. The big news of the week is the launch of their mainnet v2 that’s happening on the 31st of march and it’s gonna see improvements in their smart contracts multi-codec adaptive bitrate streaming and the native AIOZ token wallet browser extension. So something to look forward to and see if the AIOZ token will receive a positive price hike for all of the team’s efforts.

Here’s the bullish scenario for AIOZ. If it manages to break above the resistance level at $0.26 cents then that’s going to be very positive. If it’s gain some momentum and buying pressure builds up then we might see the next resistance level and test it at $0.30 and $0.34 with significant buying volume will lead to a good chance of crossing above $0.50.

But on the bearish side of AIOZ, it has been in a downtrend channel. so if the $0.20 support level is not maintained, the price could fall to $0.16 and then $0.12 and then perhaps even lower.

These are the our four top altcoins for the April 2022. Chiliz, Link and Axie of course are big projects but lesser-known projects like AIOZ are also worth considering and we certainly feel they’re worth your time.