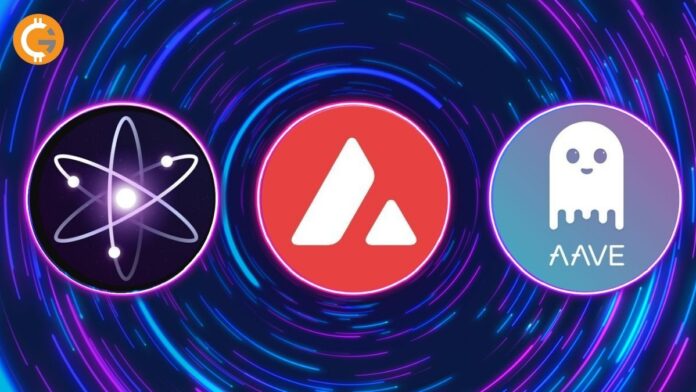 Crypto has been in shambles over the last couple of months we’ve seen nothing but red in these markets. However, you have to remember in times like these, this is where most of the money in crypto and every single financial market on the planet has been made. In times where there’s lots of fear lots of selling and overall a lot of fud in the market that is when the people who see the opportunity ahead of them take a firm grip of it and they run with it.

What you guys have to remember is some of these prices that we are seeing right now on various different cryptocurrency projects are likely prices that we may never see ever again.

In this article we’re gonna be going over our top 3 cryptocurrencies you should be considering for the month of march 2022. These coins we are gonna be talking about today are absolutely incredible and what they’re planning to do in the future is even more.

Avalanche is basically a blockchain that allows developers to build a defi applications in their system and ecosystem. You see the main benefit of avalanche is that avalanche actually provides much faster transaction times and lower gas fees all over Ethereum and what they’re currently doing with Ethereum right now.

These are two things that Ethereum has been struggling with since its early days of conception and they’re really seemingly not going to be fixed likely anytime soon. Again avalanche has been around for a very long time when it was launched it was around $4 per coin. Now it’s all the way up to at a highs of $135 per coin again at the time of writing this article.

It’s going to be probably hovering around the $90 to $50 range that’s where it’s been trading at for quite some time now so make sure you keep an eye on it. Now one of the main reasons we think avalanche is going to do so well in the future is actually the position that they currently hold as far as the adoption rates go and what they’re developing and how fast they’re developing it.

If we actually look at the VP of marketing for avalanche he actually posted some super insightful analytics about the project. He also shared a little bit about avalanche is experiencing Ethereum level activity.

Just a year and a half after its launch this is an incredibly popular blockchain that more and more people are seeming to want to use and again all this growth has been facilitated in a very short amount of time. Meaning that likely this will hopefully continue into the future and who knows what we’re going to see in 2022.

If you actually look at the recent Solana issue where Solana actually ended up having the entire network getting shut down doing a lot of people panic selling and overall stress that was happening on the markets Avax was fully up and running with no issues whatsoever during that time.

We really think that avax has some huge potential going forward into the future and we’re very excited for to reach back into those all-time highs that we saw just a couple of months ago.

What’s really interesting about cosmos is that the term the internet of blockchains has kind of been widely adopted to that specific coin for a variety of different reasons what cosmos essentially does is allow different independent blockchains to talk to each other communicate and work alongside each other and interconnected with each other at the same time.

A great example of this would be if you looked at private and public blockchains in transferring different types of cryptocurrencies of course to each other. It does this through something called IBC which stands for Inner Blockchain Communication protocol this is essentially what keeps all these different ecosystems together and working properly.

The basic thing of IBC is basically that it allows you to send tokens and data information from each blockchain to the other blockchain. This is all tied together of course by cosmos which is the project or the cryptocurrency.

Now one of the very interesting things about cosmos is that they’ve recently been doing a lot of airdrops. One of the main reasons for this is that if you actually look at the different applications that are running on the cosmos network you can see that you’re staking atom which is cosmos of course native token. Now if you are actually staking cosmos native token you actually are a part of all of these different blockchains at the same time so again when these airdrops happen you’re much more likely to get different types of currencies different types of tokens and take advantage of that all together.

Now again cosmos is trading between the $30 to $40 range and it’s more than likely going to fluctuate a little bit more when the time this article comes out. Just because of the overall market volatility that we’re seeing right now with Russia Ukraine and a bunch of other stuff that’s happening in the world that’s a little bit chaotic but overall we’re very bullish on cosmos and we cannot wait to see what else they do with the project and how it continues to develop into the future.

Aave is basically a defi liquidity protocol what this means is basically when you stay crypto within that ecosystem you can essentially lend out that crypto and earn a certain amount of interest on it being staked. What’s very interesting about this is there are over 20 billion dollars already within the Aave ecosystem.

Now this is down a little bit from recent numbers but again it’s still an impressive thing nonetheless. One of the big reasons why this number is down significantly is because a ton of accounts just got liquidated after that huge dip that we saw in crypto just a couple of months ago. Now Aave has a whole bunch of markets that they are constantly introducing to new holders.

And we think it really shows how dedicated the development team is to not only bring new amounts of innovation into this industry but also to bring new blockchains and new ecosystems into this overall project. One of the big benefits of them adding these new markets to their protocol is they’re going to make transactions cheaper and of course transaction times faster to begin with one of the big things that they’re currently working on right now guys is called Aave3.

Must Read: Elon Musk in a tweet told who is Bitcoin founder Satoshi Nakamoto

We’re very excited to see when this fully gets released what this is going to allow people to do. It’s going to allow users to transfer their liquidity of course from one network to another. We’re also seeing a even push towards more institutional minded things with the launch of course of a arc. This is going to allow large banks and even huge corporations to start safely lending within the defi space something that a lot of these big corporations and even governments institutions and large banks in general have been asking for for a very long time. now again Aave has pulled

We’re very excited to see where the price goes. We’ve seen some people predict it up to the $200 range into the $180 range. We would hope that we can get back to those previous eyes and even further.

That’s pretty much it for our top crypto picks for the month of march 2022.