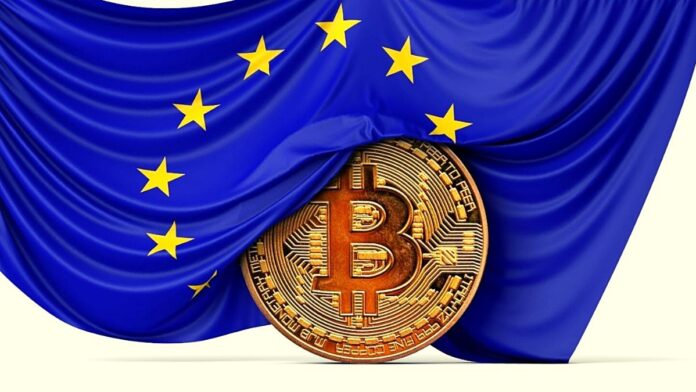 Bitcoin and Ethereum are the two most popular cryptocurrencies today. There’s a lot of others that also function on proof of work but anyway what’s happening is European union have been trying to pass this law or this legislation that has language about cryptocurrencies in it.

A few weeks ago they were talking about banning proof of work specifically a consensus mechanisms. Cryptocurrencies that use that type of consensus mechanism and now they took it out and put it kind of back in but a lot more broadly.

As a user maybe they’re going to have just like how binance.com has a special site for binance.us where the us citizens are very limited in the cryptocurrencies that they can purchase because it’s a centralized exchange. It’s quite possible it’s going to happen in Europe too.

If you have id that’s saying that you’re a European resident or European citizen suddenly you can’t buy or trade Bitcoin or Ethereum that is huge. It’s alarming and it’s gonna suck for anyone who doesn’t know how to use a decentralized exchange.

Andrew Henderson from nomad capitalist, one of the tips he says is never live in the country you’re actually a citizen of and this is a scenario that would play really well into your favor. But the best way honestly is to avoid centralized exchanges as best you can avoid giving out your personal identifying information, sensitive information to third parties and use decentralized exchanges.

There’s so many different decentralized exchanges options, liquidity is no longer an issue there. You can definitely get your trade through, not to mention the fact that Ethereum 2.0 they’re shifting into proof of stake. So will it still be banned when that rolls out, who knows?

They’re not saying specifically proof of work, there are a lot of other cryptocurrencies that might not be as green as they would like and it’s not a proof of work maybe it is proof of stake. There’s a lot to say about Solana and the computing power required for to manage all of those super fast and cheap transactions that they’re manufacturing.

Must Read: Elon Musk in a tweet told who is Bitcoin founder Satoshi Nakamoto

It requires a pretty heavy load computing power wise. Now also you guys need to keep an eye out for Thor chain that one is a decentralized exchange that lets you trade native bitcoin. This is another use case for decentralized exchanges, it’s another reason why these options exist for those of you who are new to cryptocurrencies. There’s a pure way to use it in a peer-to-peer fashion not through these centralized entities.

And the better that you are with using those options. The more free you will be able to be interacting with cryptocurrencies and advance in this growing economy. We’ll see they’re going to be voting this one on Monday so we’ll see how that vote goes.