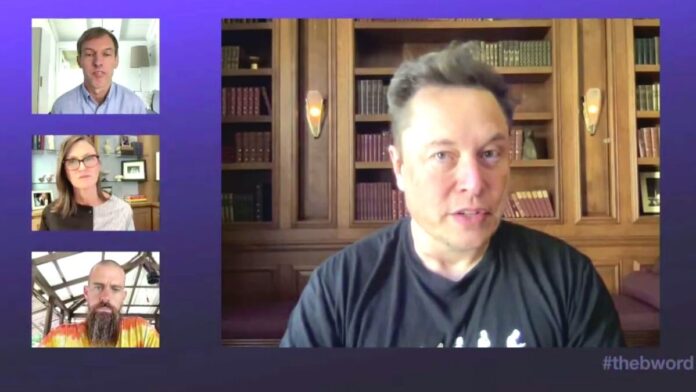 Tesla CEO Elon Musk said on Thursday that he owns Bitcoin, Dogecoin and Ethereum. Musk said Tesla and SpaceX also own bitcoin. Musk was speaking with Twitter CEO Jack Dorsey and Arch Invest CEO Cathie Wood at the bitcoin event “The B Word.”

If the price of bitcoin falls I lose money. I can pump but I don’t dump,” Elon Musk said. “I certainly don’t believe in getting the price high and selling or anything like that. I want to see bitcoin succeed.” Musk also clarified that he has “many more” bitcoins than Dogecoin or Ether.

Elon Musk also said, “I’m not selling any bitcoin, nor SpaceX or Tesla. Outside of Tesla and SpaceX stock, this is my largest holding.

Musk also clarified that Tesla will resume accepting bitcoin as payment after due diligence on the amount of renewable energy used to mine the digital currency during “The B Word” conference.

“The most likely answer is that Tesla will start accepting bitcoin again,” Musk said.

Musk said, “I wanted a little more diligence to confirm that the percentage of renewable energy use is 50% or more, and there is a tendency for that number to increase, and if so, Tesla will be accepting bitcoin again.” Will start” Musk said.

The bitcoin discussion focused on how bitcoin was perceived by the mainstream.