Electroneum: The Next Phase of Growth and The Future Plans 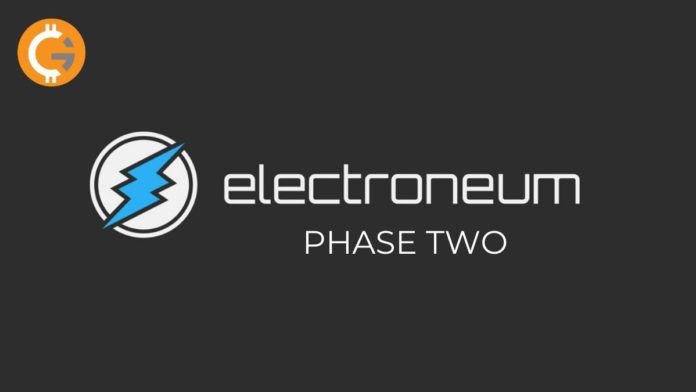 Electroneum (ETN), the first British cryptocurrency, has been making all the right noises in the market for quite a while now. With transactions being largely carried out through its mobile app, ETN has made the process of using cryptocurrency easier than ever. And, the idea of launching ETN rewards has further helped in the growth of this cryptocurrency.

As ETN plans to launch the Phase Two of its plans, Richard Ells, the founder and CEO has highlighted the present success story and the future plans for the cryptocurrency. So, let’s take a look!

The overwhelming response to the ETN reward program

The ETN reward program has been running for three years now, and it has achieved its goals remarkably. The aim of this program was to gain mass adoption, with the sights being set on catching up to the big players in the market, like bitcoin and ethereum.

The reward program basically started letting out ETN samples for people to use, and the response was overwhelming. It gained ETN over 3.8m registered users, 2.4m confirmed app installs, and 270,000 app to app instant transfers. And, as the users are now well-aware of the merits of ETN, the reward program is all set to be closed for beginning the next phase for the company.

The plans for the next phase of growth for ETN

ETN has launched the AnyTask platform to bring together people who want to enter this market, but don’t have a bank account. With the site already having over 200,000 registrations, the response has been great here too, in terms of gaining a global buyer base.

So, there will no longer be handing out ETN rewards for free anymore because the user base has already been gained and the product now needs to aim towards a sustainable growth.

Must Read: Electroneum: Predictions and Trends That Are Going to Rule 2020

The other important initiatives by ETN

ETN has come up with two new websites, with very exciting prospects for the future. ETN Everywhere is slated to be a global network that lets ecommerce businesses and local stores to accept ETN as payment by listing their business to the merchant app. It will let customers from all around the world to spend their ETN on these stores.

The other initiative is ETN Donate, which has chosen select NGOs to receive block rewards for enhancing their charitable capabilities. The users can support these charities by donating their ETN. These charities are completely authentic as they are validated and verified by ETN.

So, there are some really amazing developments in store for the ETN users, and the future definitely looks great for this cryptocurrency.